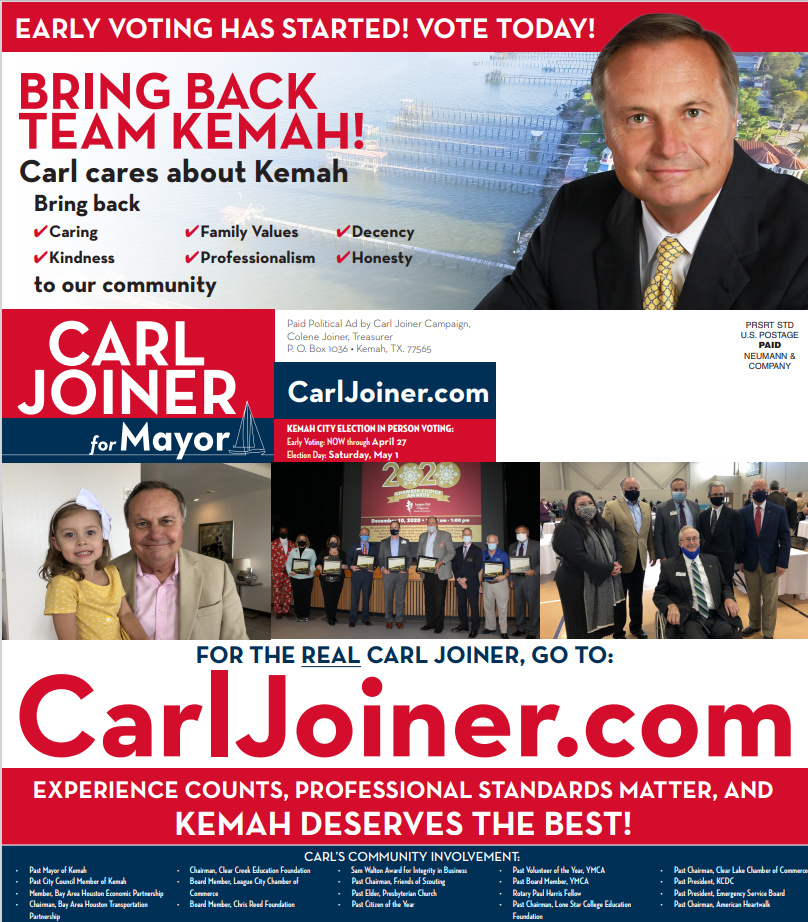 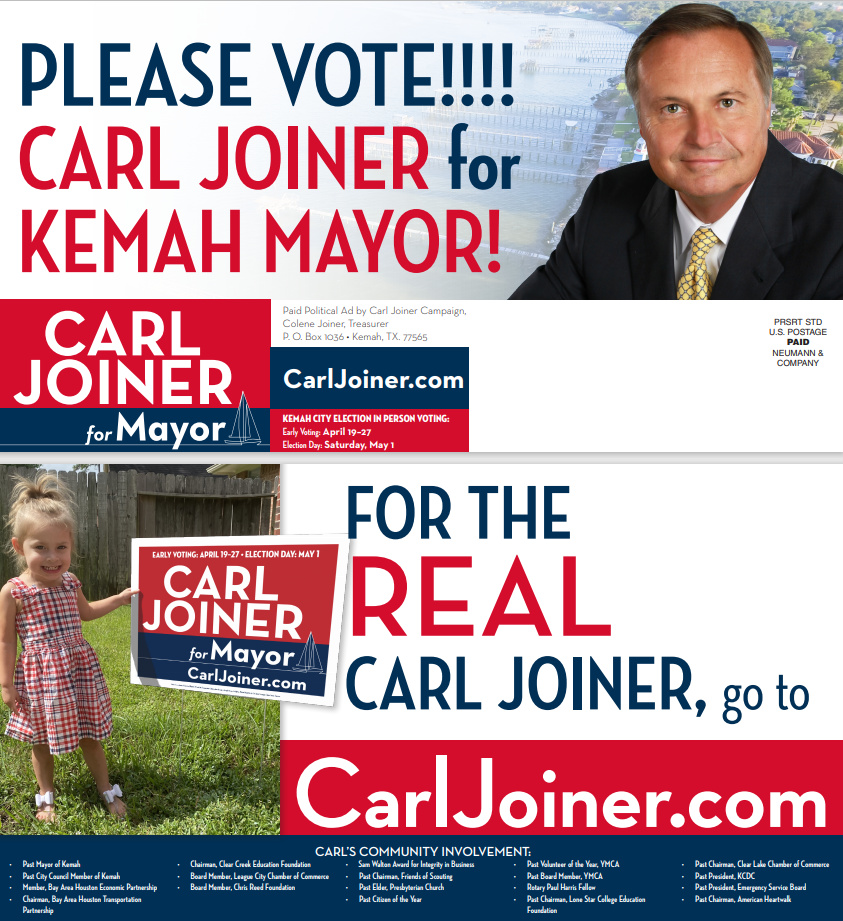 Image Files of our flyers for Carl Joiner for Mayor 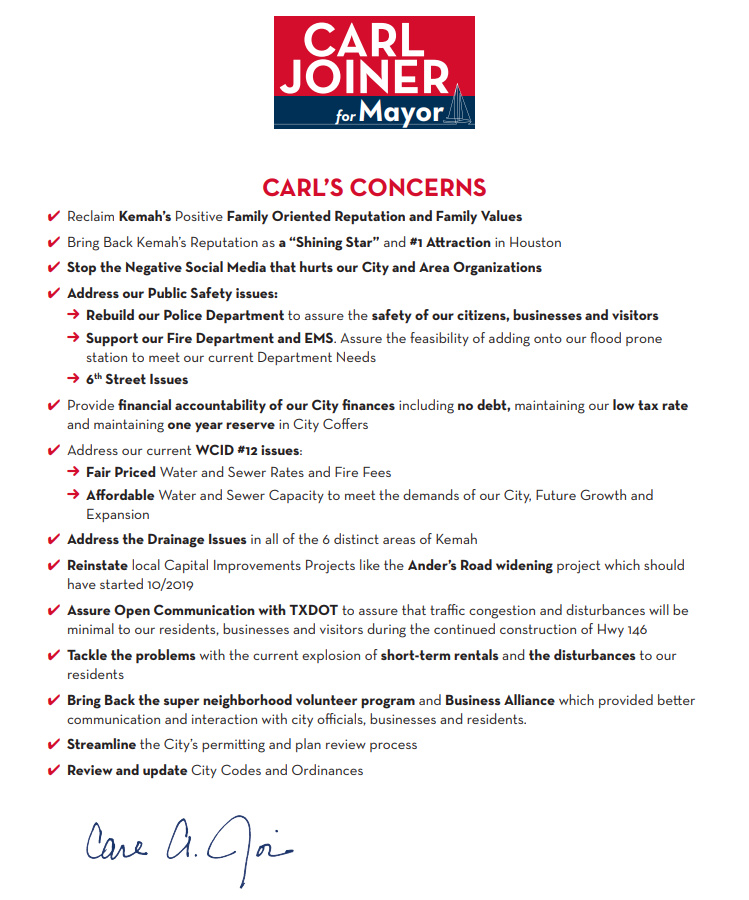 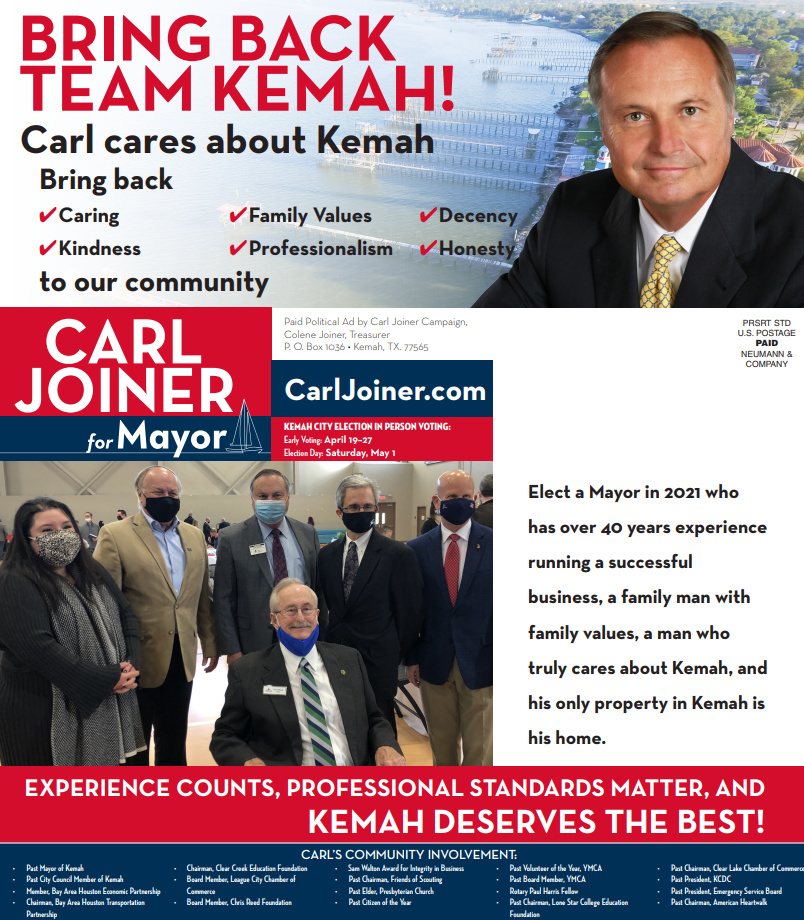 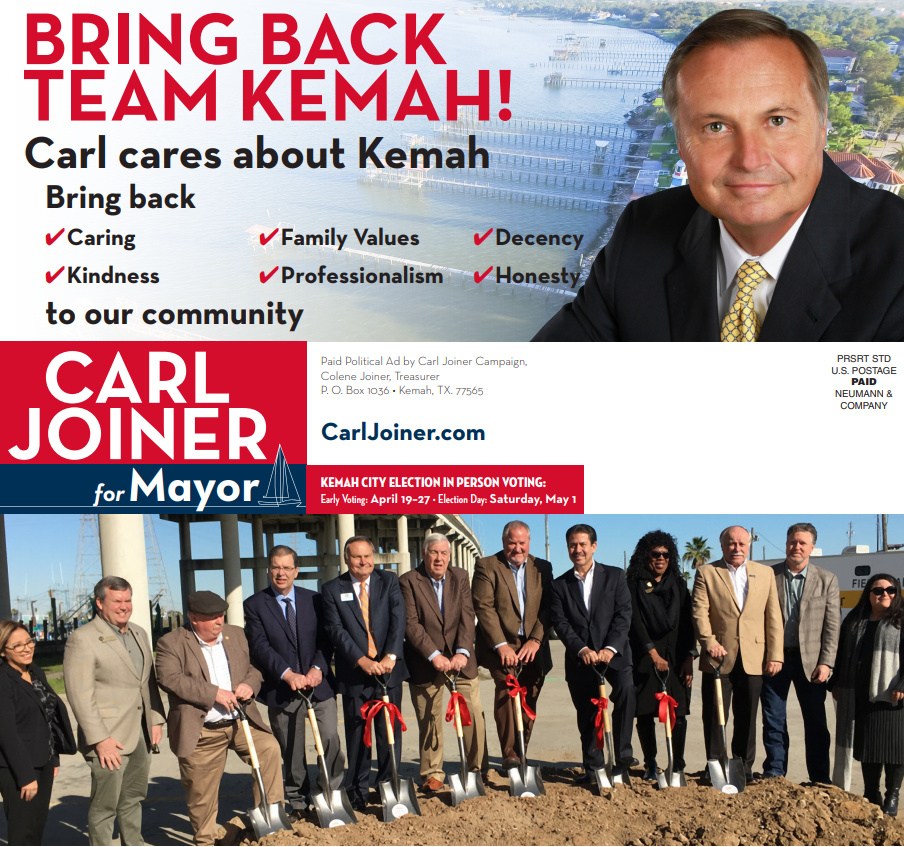 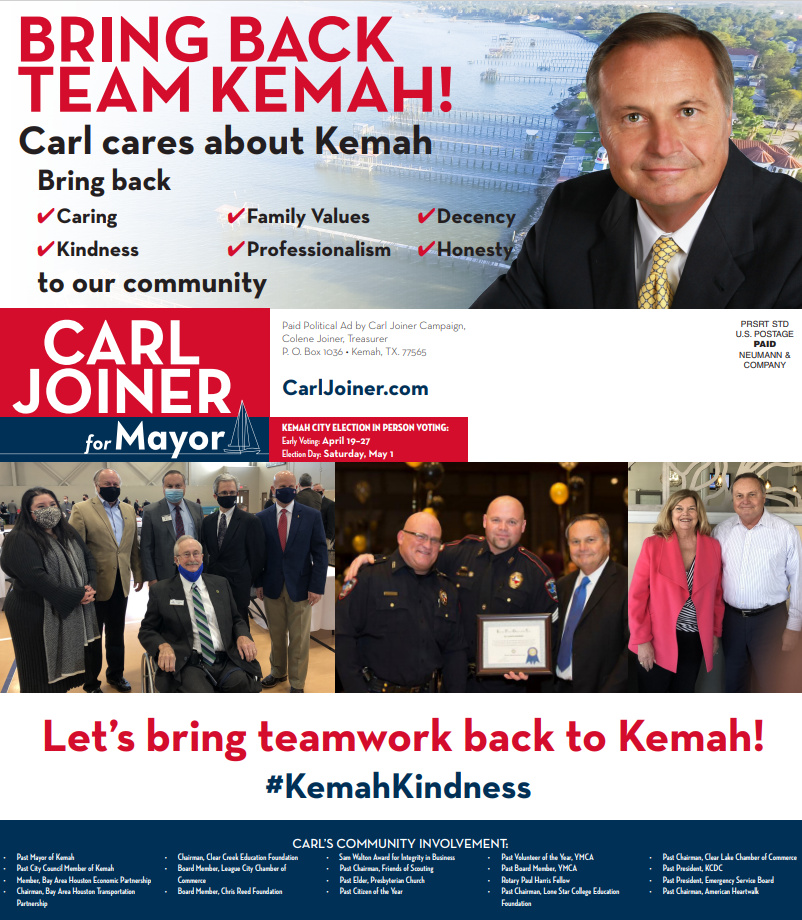 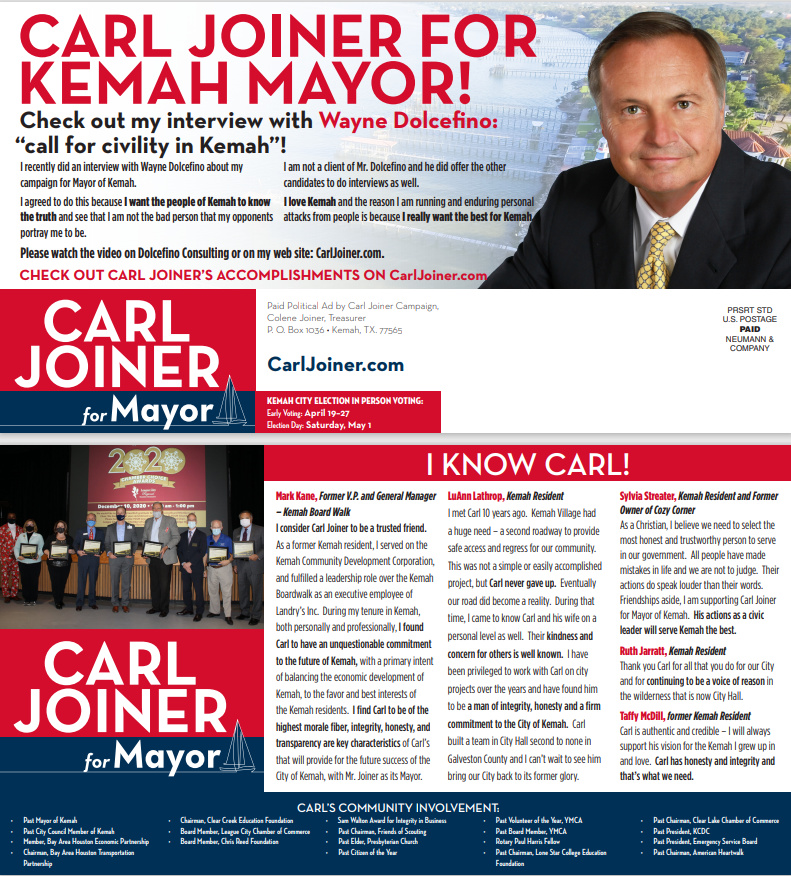 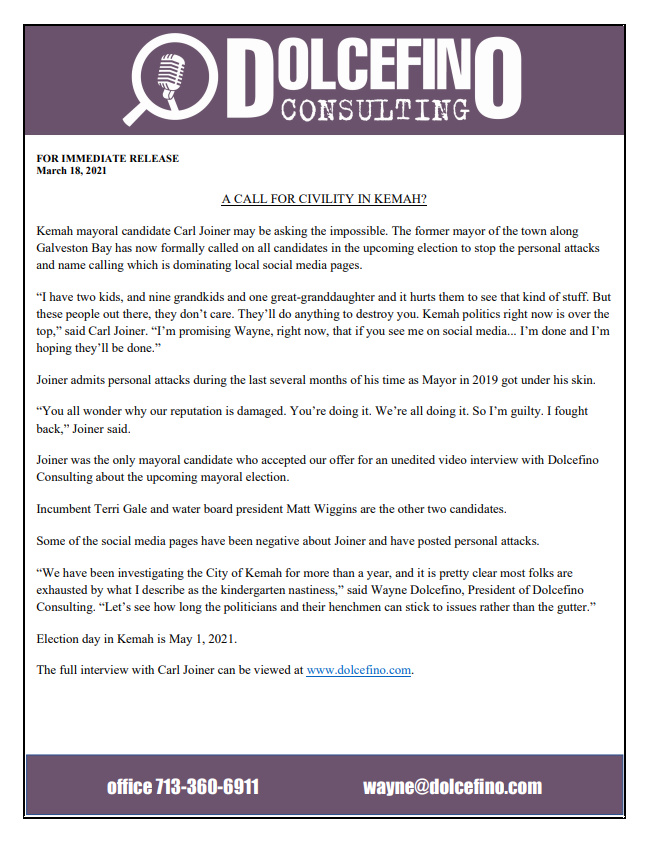 My name is Carl Joiner and I live on the South side of Houston, Texas in a City called Kemah.  I am writing to you today as Chairman of the Bay Area Houston Transportation Partnership (BayTran).  We are an organization that promotes Transportation and Infrastructure investment in Harris, Galveston and Brazoria Counties in Texas.  One of our top Agenda Items this year, has been since 2008, is the Coastal Spine.  On September 13, 2008, Hurricane Ike hit the Coast of Texas with a 17’ Storm Surge.  This storm hit about the same time as the Financial Crisis in 2008, so did not get much publicity.  The Storm devastated the Texas Coast with over $30 Billion in damages.  I remember it well as I live on Galveston Bay and we took the 17’ surge caused by the Storm.  If the storm had hit a little further one direction, it would have gone up the Houston Ship Channel and the damage would have been more in the $100 Billion range.

Shortly after Hurricane Ike in 2008, a group of individuals started working on the IKE DIKE, later renamed the Coastal Spine.  This idea has been studied and now is about ready to proceed with funding and final design.  I am asking today if you would try to fund the $30 Billion + or – project in your first 100 days in office.  It would be a good investment to save $100 Billion or more in damages.  I am attaching a page with information on our Port System, NASA Johnson Space Center, Texas Medical Center, companies along the Houston Ship Channel, and what our region produces, all having a big effect not only on Texas, but the US and the World.

As you know, you were in Houston recently to look at the damage from our recent freeze.  A lot of the people you met then will be involved in this meeting also.  This meeting will include area leaders, Republican and Democrat. As you are aware, Hurricanes do not care which party we belong to.

You can come to Houston or we can come to Washington D.C.  I am copying individuals that back this concept and would like to get it funded soon so we can start protecting our Coast.  Remember, it has been 13 years since Hurricane IKE.  Hopefully, you will allow us to meet with you.

See Below– UNPREPARED: A NATION AT RISK 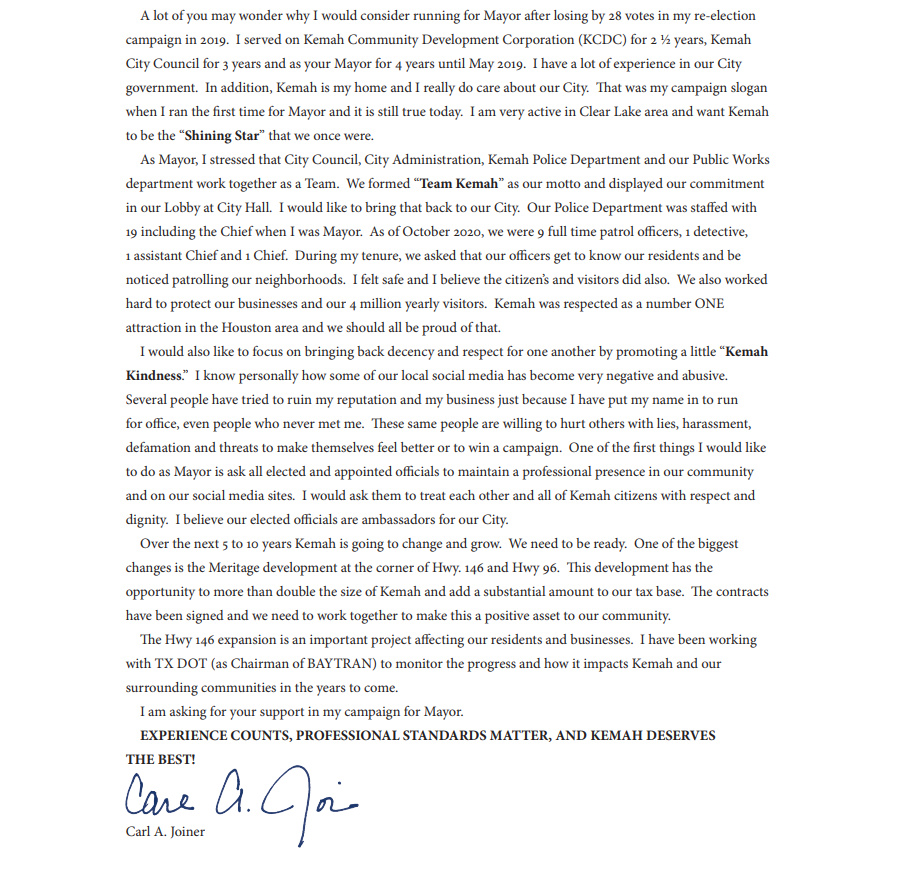 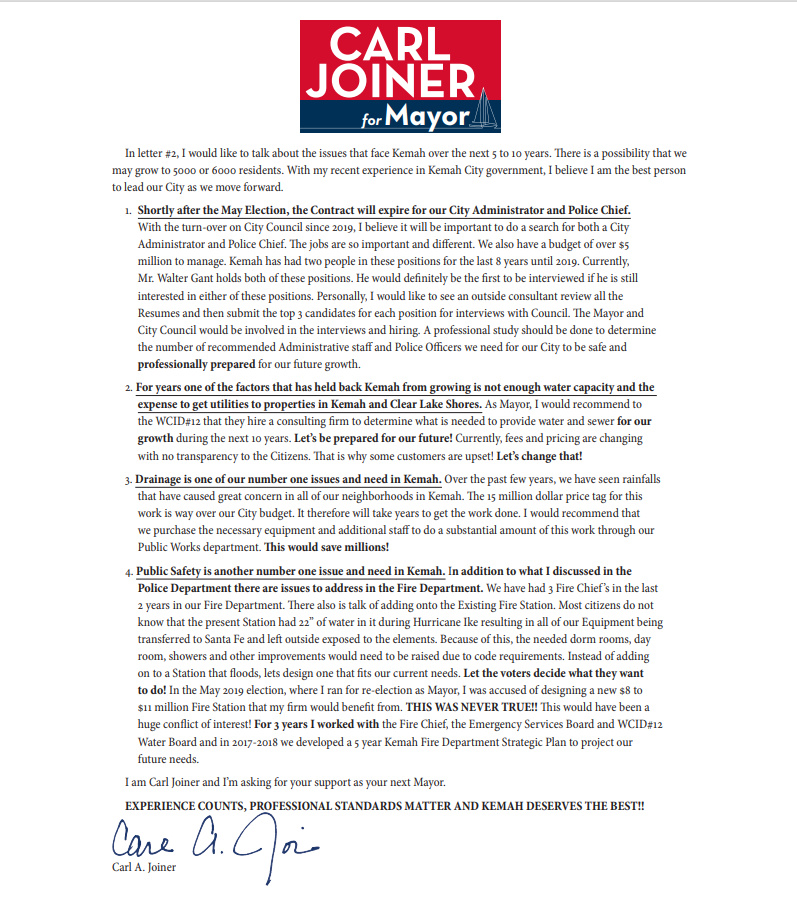